In 2020 gold reached record highs of over $2,000 per ounce. Since then it has gradually come down and has experienced fluctuations.

In one instance, $7 billion dollars were withdrawn from gold funds with a $3 billion inflow into Bitcoin in the same period in 2020.

How does Bitcoin affect gold prices?

Bitcoin is a new digital currency which is a little over a decade old. Yet, there has been a lot of interest in bitcoin from individual investors, driving the price up over the years, to end up in a crash. Bitcoin is subject to extreme fluctuations in value and is not for investors that cannot tolerate the stress associated with such extreme swings.

It seems that most people use Bitcoin as a means of investment, rather than a form of currency to purchase items. That is probably because many places either don’t accept Bitcoin or don’t know how to do so.

In 2020 tremendous interest in Bitcoin was expressed by institutional investors. This drove the price up again. More and more institutions started buying large sums of Bitcoin.

Companies like Square and Paypal started to expand the use of Bitcoin by offering ways to spend Bitcoin to buy things, rather than just store it for investors on their platforms. This would entail converting Bitcoin to currency at the day’s price. Of course with Bitcoin going up in value, many people may not want to spend it.

What’s interesting is that this new form of currency or store of value, if it ends up being that, has been competing with gold as an investment.

There are many risks associated with Bitcoin, such as hacking of Bitcoin wallets, which has been in the news, more powerful computers and Quantum computers and the fact that some people say there is really no limit on how much Bitcoin can be created, even though most people think only 21 million are created and 18 million have been mined.

Some people say that there is really no limit on how much Bitcoin can be issued regardless of the 21 million that is said to be the limit, they say there is no restriction anywhere placed on issuing more than 21 million Bitcoin. That of course can be equivalent to printing money and can reduce the value of Bitcoin if it happens.

What’s interesting is now both Bitcoin and gold have been on the rise at the same time, at least for a little while, with Bitcoin almost doubling and gold going up about 5% recently.

Last year JP Morgan forecast price of Bitcoin to reach $130,000+ by the end of the year and Citibank forecast $300,000. When Bitcoin prices went down, JP Morgan lowered their forecast. But now, Bitcoin is up again. It can be difficult for analysts to determine the price of Bitcoin with any accuracy in the short term, but in the long term if supply is limited and demand continues to increase, it is logical for the price to continue to climb.

Gold has also been appreciating over time but inflation needs to be taken into account to determine it’s real increase.
Gold also needs to be physically stored, which can add costs of storage or fees that gold funds would charge which is paid by investors. Lastly, physical gold is under your control, so you can always access it, while when you buy stocks or ETFs that hold gold reserves, you are sustaining an additional risk of a third party that holds the gold for you and are at the mercy of their integrity.

While Bitcoin is the king of crypto-currencies at the moment, there is many other alt-coins that are looking to compete. Some governments are adapting Bitcoin while others are creating their own Crypto-Currencies. The effect of these in the future can affect the price of Bitcoin and thereby possibly price of gold, although the relationship between gold prices and bitcoin prices may become more remote in the future.

China recently regulating Bitcoin causing prices to drop along with tweets from Elon Musk that were manipulative, first stating Tesla will accept Bitcoin, then later stating it won’t accept Bitcoin due to affect of mining Bitcoin on the environment. Then Musk stated that Tesla will accept Bitcoin again. These events from China and Manipulations from Elon Musk together seem to had an affect on Bitcon reducing the price from its all time highs to about half of what it was. It took Bitcoin months to recover to the previous prices.

Today Bitcoin is at $66,408 which if it is not a record, it is very close to it. Gold is also up at the same time from $1790s last week to $1825 today. It may be that in the future both Bitcoin and gold will increase at the same time, but most likely the ascent of Bitcoin has hindered large increases in gold prices in the long run due to competition.

While gold is a much safer investment, with risks come rewards (or losses). Bitcoin has been on a rise and has substantially outperformed gold in recent months. However, risks that face Bitcoin continue to grow, including regulation, hacking, Bitcoin exchange operators disappearing with the money (which has happened in a number of occasions), technology risks such as more powerful computers that may be able to penetrate the Bitcoin encryption as well as Quantum computers that vastly outperform all existing computers and risks of massive manipulation from Wall Street and the likes of Elon Musk. There are also risks of internet down time, losing your password to your wallet and new technologies that can be used to undermine Bitcoin. Major swings in price also make Bitcoin less attractive as a form of currency as people are less likely to spend it if it swings down, and still less likely to spend it if they think it will continue to go up.

Gold or Bitcoin? Which Should I Buy?

At the end of the day, gold has been around for many millennia as a form of exchange currency and investment. Bitcoin has proven to be very popular and is still developing in many parts of the world. In my opinion a form of state digital currency or world exchange currency is not only a possibility but an eventuality (and maybe much sooner than expected). Whether that would be Bitcoin, Alt-coins or government issued crypto-currency, remains to be seen, although the latter is probably the more likely option as far as control and broad confidence in the currency.

Meanwhile, gold remains very popular and as always a good store of value. It may be time for Bitcoin to be added to many portfolios with diversification which includes gold and other safe investments to hedge any risks from cryptocurrencies. 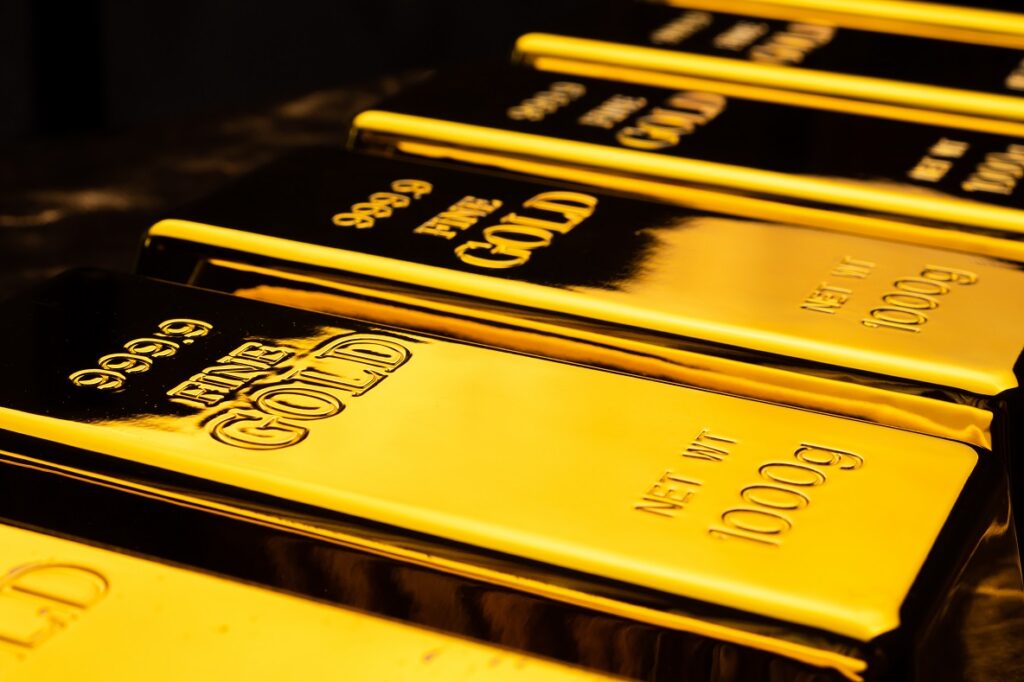 As far as pricing, Gold Bullion Bars are a less expensive alternative to Gold Bullion Coins, which will carry higher premiums depending on the country of their origin. Manufacturers can come from a variety of countries, with the most popular being Switzerland, United States, Canada, and Australia. Although the refineries, that produce the Gold Bullion Bars, are not backed by the central banks or government, they usually mandate an assayer to approve of the quality, purity, and weight of each product.

Normally, Gold Bullion Bars are at least .999 fine (but oftentimes are .9999) and most reputable refineries will encase them in a certificate card with a matching serial number on the bar. These certificates will also contain the weight and purity as well. Gold Bullion Bars are offered in a wider variety of sizes than the coins, ranging from 1 gram to a 5 oz bar and beyond.

Purchasing gold for investment purposes has traditionally been a hedge against inflation and weakness in the US dollar. For thousands of years, gold has been a store of wealth and value which continues today. Owning physical precious metals is a strategy of the very wealthy for centuries and although precious metals don’t necessarily need to be your only investment, it may be wise to make them a part of your strategy moving forward.

Offering our customers competitive prices and a wide range of inventory, while also providing a positive purchasing experience, is our top priority. We appreciate honest reviews and are available through our call center or email address, if you have any questions or concerns.